Popular Chicago DJ and producer Julian “Jumpin” Perez has leaped into the race for 26th Ward alderman, signaling a possible challenge for Ald. Roberto Maldonado (26), who has held the seat for more than a decade. 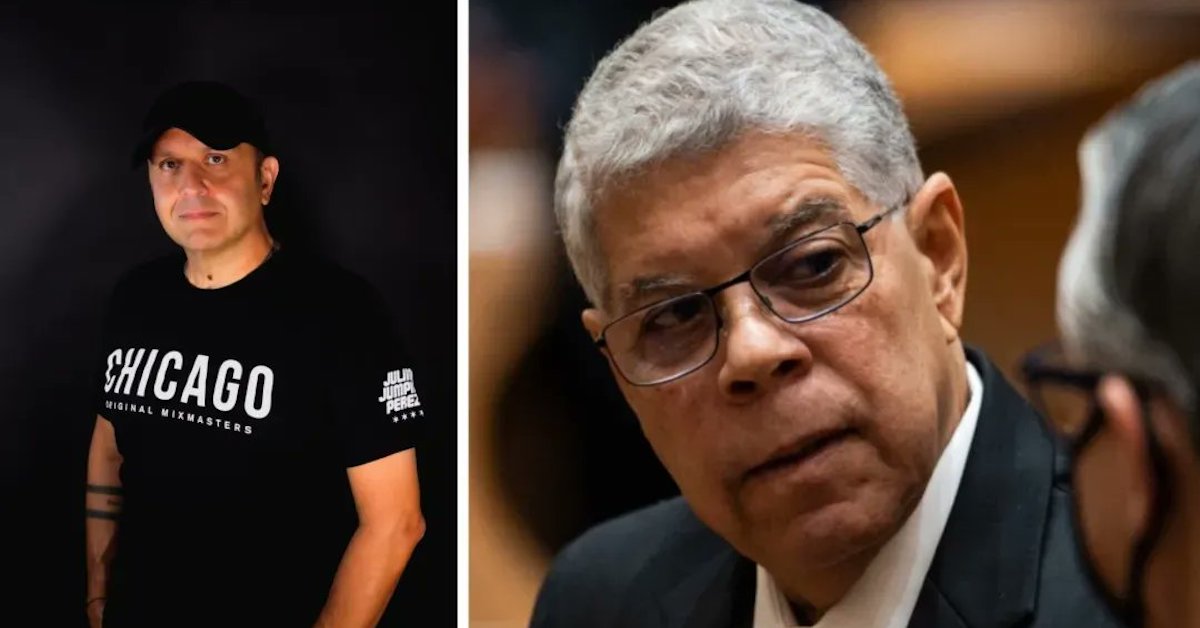 Chance will depart the city as early as Thursday, according to Animal Control. He’s headed to the St. Augustine Alligator Farm in St. Augustine (pictured on the left), Florida, which is actually a part of his species’ native range, unlike Chicago. [Facebook/City of Chicago]

The final tab to save Humboldt Park’s beloved alligator from the murky depths of the lagoon was $33,649.17, city officials revealed Wednesday in response to a Freedom of Information Act request filed by The Daily Line.

Frank Robb, the gator trapper who caught the alligator dubbed Chance The Snapper on July 16, was paid $2,500 for the work that made him a Chicago superstar, and reimbursed for $2,166.34 in travel and lodging costs, records show. 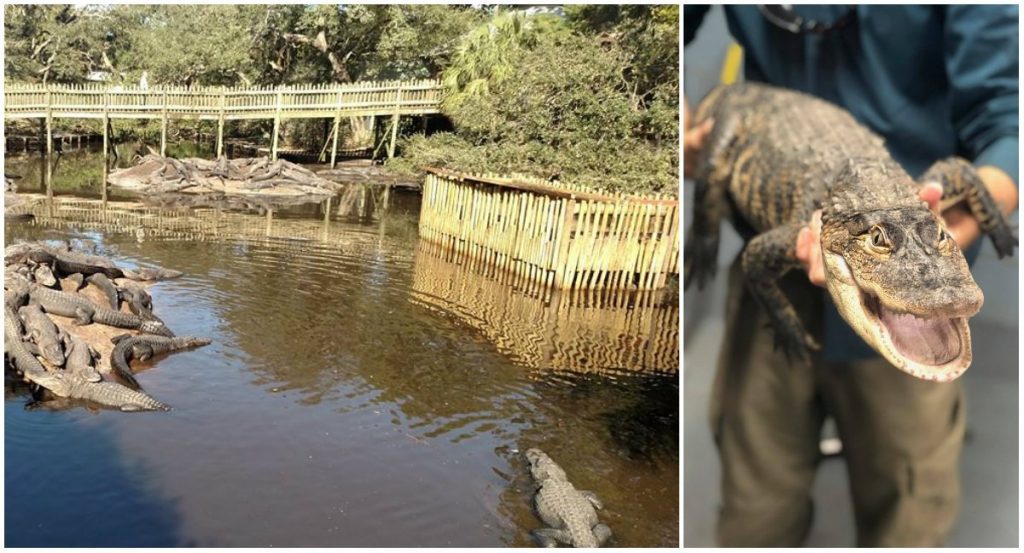 Chance will depart the city as early as Thursday, according to Animal Control. He’s headed to th...

A rendering of the 187-unit affordable housing campus being built near the western end of The 606's Bloomingdale Trail. [Chicago Department of Planning and Development]

Logan Square is primed to get nearly 90 affordable apartments on the western end of The 606’s Bloomingdale Trail — the first phase of a years-long project aimed at stopping displacement in the rapidly gentrifying area — after a key city panel approved the project this week. 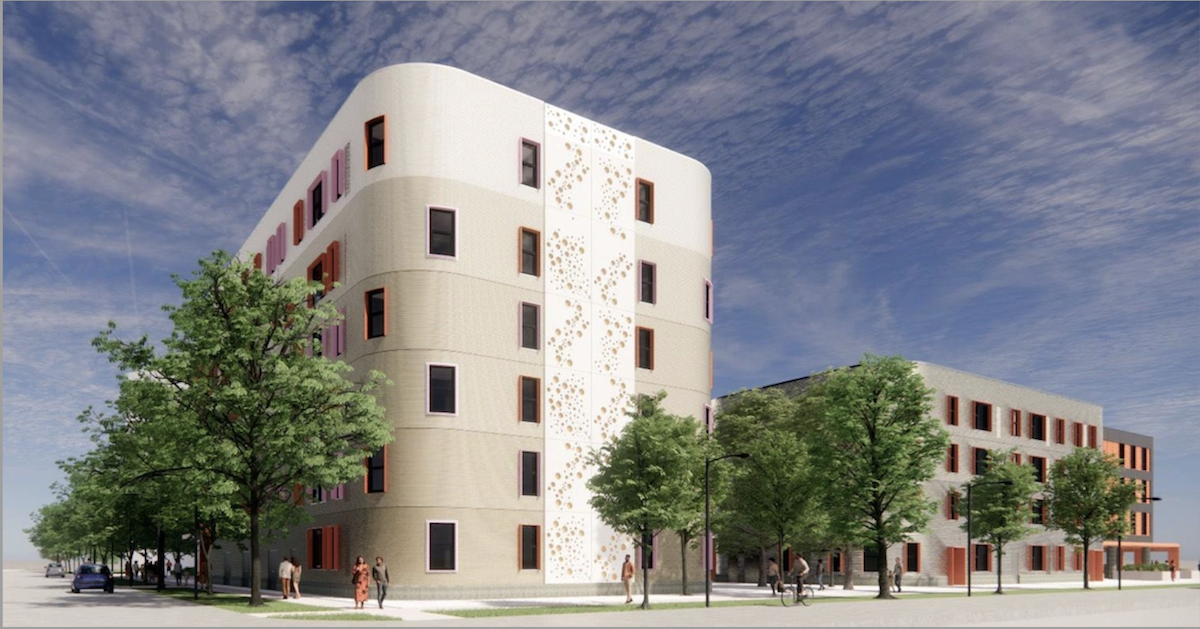 A rendering of the 187-unit affordable housing campus being built near the western end of The 606...

A rendering of the new businesses and roof decks coming to The Fields site at the Logan Square and Avondale border. [credit: Chicago Department of Planning and Development]

Some commissioners echoed concerns about gentrification but ultimately approved the developer's plans, setting the stage for a film production studio on the Northwest Side.

AVONDALE — The developer behind The Fields project at the Logan Square and Avondale border won approval from a key city panel Thursday to redevelop part of its campus, setting the stage for a new film production studio on the Northwest Side even as some community members tried to block the decision. 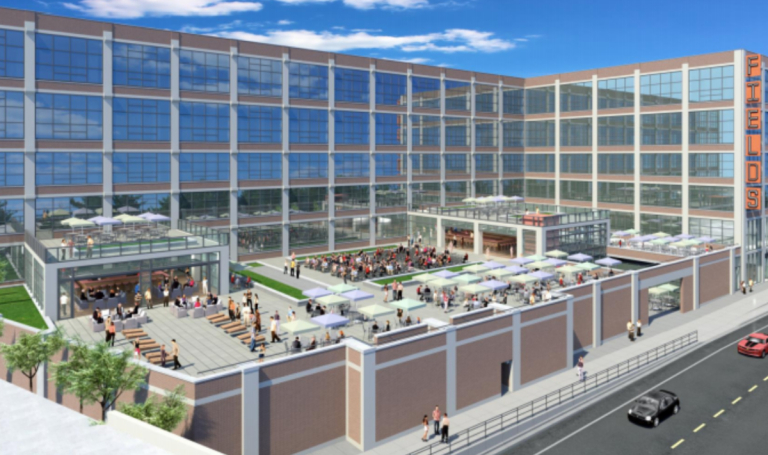 A rendering of the new businesses and roof decks coming to The Fields site at the Logan Square an...

A rendering of the new businesses and roof decks coming to The Fields site at the Logan Square and Avondale border. [credit: Chicago Department of Planning and Development]

Some commissioners echoed concerns about gentrification but ultimately approved the developer's plans, setting the stage for a film production studio on the Northwest Side.

AVONDALE — The developer behind The Fields project at the Logan Square and Avondale border won approval from a key city panel Thursday to redevelop part of its campus, setting the stage for a new film production studio on the Northwest Side even as some community members tried to block the decision.

A rendering of the new businesses and roof decks coming to The Fields site at the Logan Square an...

It's the latest in a long-running battle between the prominent landlord and Ald. Carlos Ramirez-Rosa (35th), who is driving the rezoning plan.

LOGAN SQUARE — A key city committee on Tuesday approved most of the Milwaukee Avenue rezoning plan, an anti-gentrification measure crafted by Ald. Carlos Ramirez-Rosa (35th) to block dense development along the stretch.

But one set of properties in line to be rezoned was temporarily dropped from the plan after it was revealed the property owner — prolific landlord Mark Fishman — is threatening to sue the city, the latest in a long-standing battle between him and the alderman. 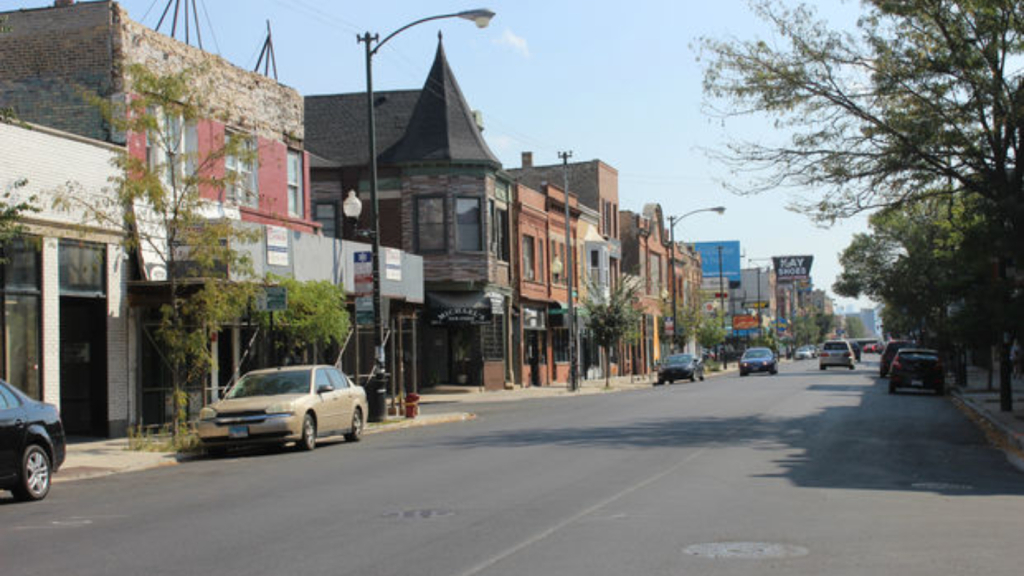 City leaders said the city is making enough progress to contain the spread of coronavirus to allow for looser restrictions on dining out and in-person activities beginning Thursday.

CHICAGO — Mayor Lori Lightfoot is easing coronavirus restrictions on bars, restaurants, salons and fitness centers, saying the city has made sufficient progress in fighting the pandemic.

Bars can reopen for indoor service starting Thursday, the mayor announced Monday. Restaurants can allow up to 40 percent capacity, up from 25 percent. Both can serve customers until 1 a.m. 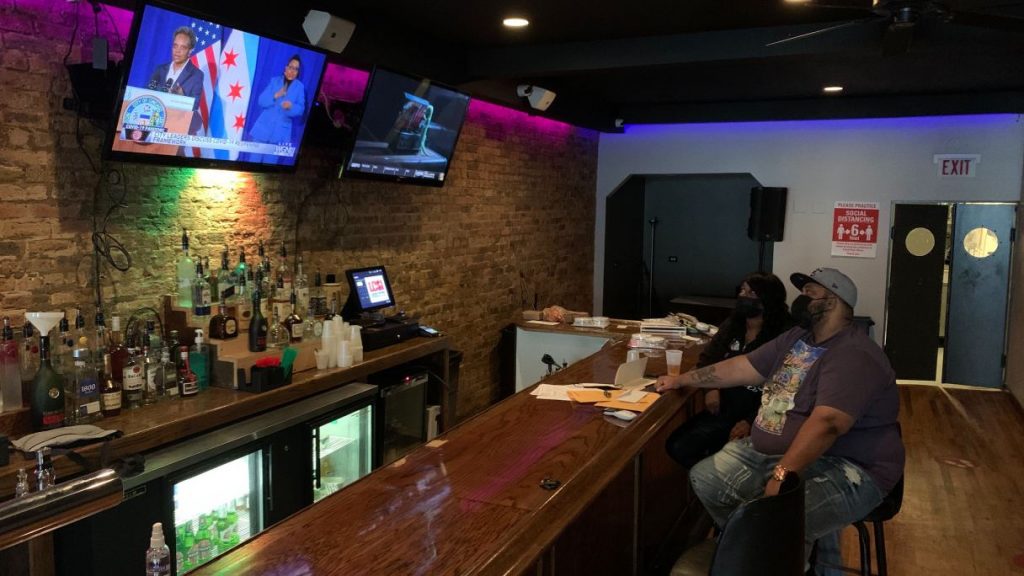 Coronavirus Restrictions Being Eased In Chicago: Bars Can Serve Inside Again, Restaurants Can Be 40 Percent

In response to community feedback, the Park District added a teen center to the field house, and a new traffic signal and crosswalk at Western Avenue and 48th Place. The plan also includes two fitness centers and a gym with a full-sized basketball court, according to city officials.

Guests also can expect a green roof with more than 30 varieties of plants, more than 200 parking spaces and bicycle parking, officials said at the meeting.

John Ronan Architects has been contracted to design the new headquarters.

Planning commissioners lauded the project for bringing an amenity-filled complex to the underserved neighborhood.

Commissioner Maurice Cox called it “by far one of the most transformational investments” the city has made in the Brighton Park neighborhood.

Plan Commission approves a new @ChicagoParks headquarters at 48th and Western in #BrightonPark. It includes a two-story, 88,000-square-foot office that will replace the agency's current HQ in Streeterville, as well as adjacent park space and a fieldhouse on a large, 17-acre site. pic.twitter.com/IPnsrR2xm9

The Chicago Park District sold its headquarters to Northwestern Memorial Hospital for $22.5 million in 2015.

City officials unveiled the plan to move the headquarters from Downtown to Brighton Park in 2018. At the time, then-Mayor Rahm Emanuel said the move would bring 200 existing jobs along with “much-needed recreational assets” to the South Side neighborhood.

Brighton Park was selected out of 20 possible locations because it is one of the top five community areas in need of open space, city officials said, and because of the site’s close proximity to the Western Orange Line and the Western bus route.

No price tag for the facility has been revealed. Park District Supt. Michael Kelly said officials are working to secure more funding for the project.

While the project was well-received, some commissioners raised concerns the project could result in gentrification-fueled displacement.

“What we don’t want is to end up with this beautiful park but all of the Latinos pushed out of the neighborhood, commission chair Teresa Córdova said.

“We need to make sure this park does not result in the gentrification of this neighborhood. They deserve these amenities, too.”

An expert said the move appears to be a "blatant" example of campaign finance law exploitation.

LOGAN SQUARE — Carlos Ramirez-Rosa was sworn in last week as alderman of the 35th Ward, ushering in his second term.

It wasn't the outcome landlord Mark Fishman was hoping for.

Fishman, one of the most well-known property investors in the gentrifying neighborhood and a longtime foe of Ramirez-Rosa's, donated approximately $100,000 to Amanda Yu Dieterich's campaign to unseat Ramirez-Rosa, according to a Block Club analysis of campaign contributions filed with the Illinois State Board of Elections.

Fishman, who declined to comment for this story, made the contributions from dozens of different limited liability companies associated with the properties he owns as well as his real estate company, M. Fishman Co.

Fishman’s organizations made 107 contributions of $990 each in two bursts in January and February, all from the same address on Fullerton Avenue and from Eric Hoberman, who is executive vice president of M. Fishman Co. and the agent of most of the LLCs, according to the analysis.

Candidates must report contributions of $1,000 or more by filing a Schedule A-1 report with state officials within five business days — unless Election Day is a month or less away, when candidates have to report those contribution within two business days.

Fishman's donations make up approximately one third of all donations made to Yu Dieterich's campaign, which raised a total of $309,189, according to records filed with state officials.

In January, when asked about an individual contribution from Fishman, she told The Daily Line she saw nothing wrong with taking contributions from property developers and managers.

Ald. Carlos Ramirez-Rosa and challenger Amanda Yu Dieterich facing off at an aldermanic forum. [Block Club Chicago]
Fishman's donations appear to be a "blatant example" of campaign finance law exploitation, according to Alisa Kaplan, policy director for Reform for Illinois, a nonpartisan research and advocacy organization fighting for transparency in government.

In Illinois, corporations are allowed to make contributions to candidates under LLCs. Many states across the country, though, don't allow the practice because it opens up the door to dark money contributions, according to Kaplan.

"You don't ever want one individual to have a disproportionate amount of influence over a candidate," Kaplan said, adding, "The other reason is you don't always know who is financially involved."

Fishman's donations "show the way the current law can be exploited," Kaplan said.

"Certainly the issue of whether to bar corporate contributions has come up before — maybe it should come up again," she added.

Fishman has been politically active in the past, routinely donating to the alderman Ramirez-Rosa ousted in 2015 — Rey Colon.

Ramirez-Rosa said that Fishman's attempt to influence the most recent election didn't work.

"More than anything, I'm humbled and appreciative of the voters," Ramirez-Rosa said. "Despite receiving a lot of mailers from a very well-funded campaign, they chose to elect me.

"They want an alderman that is going to be independent and put their interests first."

Ramirez-Rosa and Fishman have a long history of being at odds. Dating back to 2015, Ramirez-Rosa painted Fishman as the mascot for gentrification in Logan Square, a label Fishman has said is undeserved.

Things came to a head in early 2019 when Ramirez-Rosa and State Rep. Will Guzzardi moved out of their shared office on Sawyer Avenue they leased from Fishman amid a rent dispute. Fishman alleged Ramirez-Rosa and Guzzardi owed more than $42,000 in back rent — a dispute stretching back to December 2015 when Fishman bought the building at 2708-2710 N. Sawyer Ave. Ramirez-Rosa said any back rent owed to Fishman is the responsibility of the state.

Fishman ultimately filed a lawsuit against Ramirez-Rosa, which is currently pending.

Ramirez-Rosa declined to comment on the status of the lawsuit.

"My legal team has filed our response and now we're just waiting to hear what the next steps are," Ramirez-Rosa said.

Do stories like this matter to you? Subscribe to Block Club Chicago. Every dime we make funds reporting from Chicago’s neighborhoods.